Free SHIPPING on Domestic Orders $35+ | BUY ANY SET, GET ONE FREE! USE CODE "bigsale" AT CHECKOUT

Now reading: The History Behind the Style of Cardi B's Nails
Share
PrevNext

Cardi B is famous for her rapping abilities, but her fashion, specifically her nails are famous as well. Cardi is known for her over the top, pointed stiletto, colorful, and 3D nail designs. She wears these long nails as a fashion statement and an art form and has been with her since before she was a famous female rapper.

However, throughout the years, the way she gets her nails designed is different, and the transformation parallels her success. Cardi is still sporting epic nails, but now they are done in a more mature and refined way. Read on to learn about the history behind the style of Cardi B’s nails and some of her most memorable nail looks. 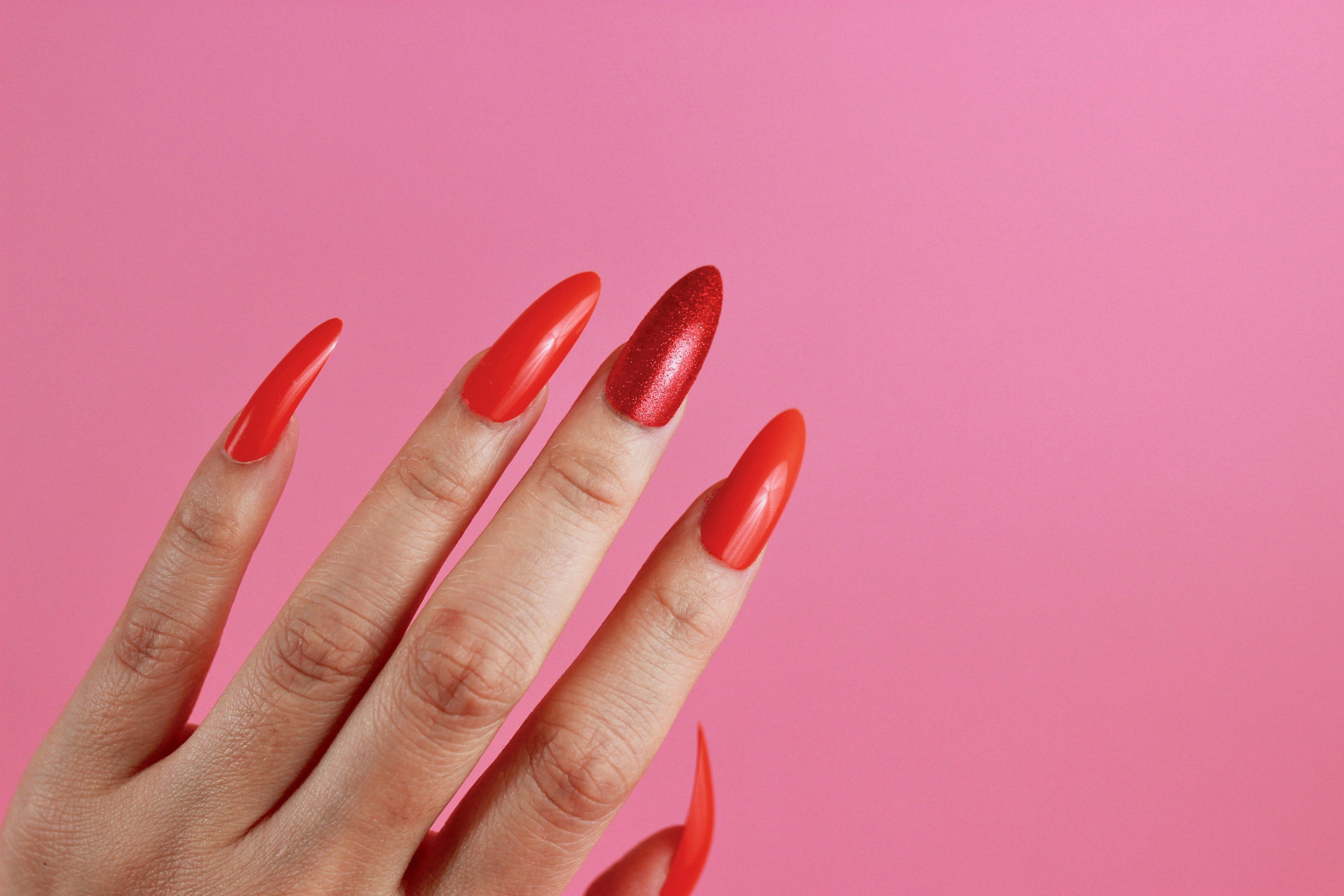 The Artist Behind the Nails

Before you can look at the nails themselves, you have to know the artist behind them. Jenny Bui, also known as the “Queen of Bling,” has been doing Cardi’s nails since she was just 20 years old.

Jenny was born in Cambodia and traveled through Thailand, Vietnam, and Canada before she arrived in the United States in 1990. Jenny creates incredible 3D nail designs using crystals and other decorative appliques. She is a Swarovski celebrity nail artist and has two salons of her own in New York.

The early days of Cardi’s nails are even more wild than today’s. Back before she was well-known as a rapper, her nails were a lot more extreme. She preferred very large stones, 3D bows, and other attachments like pearls and chains.

These nails were very packed full with attachments and often covered almost the entire nail. You may have even seen things dangling off of the nail like chains, stones, or gems. Over time, she has maintained some of this style, but it has evolved.

The year 2016 is an excellent example of the early style of Cardi B. In the music video “Foreva,” she sports 3D nails decorated with animals, bows, ice cream, donuts, and rhinestones. At least 80 percent of each nail is covered in add ons. The color scheme is very sweet, sporting light blue, pink, and yellow.

In 2018 there was a large shift from the previously over-decorated nails. This is where you can see more of a mature and intricate design start to move into Cardi’s nail game. Instead of many appliques, there are a few main stones placed into geometric designs.

Another large change that occurred in 2018 was the change of shape in her nails. Her signature pointed nail look was changed to a square or coffin-shaped nail. Cardi claims that the birth of her daughter Kulture prompted this shape change so that she could prevent from hurting her daughter with the pointed nails.  As the baby has gotten older, her signature pointy shape has come back into the picture.

2018 also hosted one of Cardi B’s most notable nail designs to date. For the 2018 Grammys, Cardi wore a pair of claw nails with a base that was milky white and almost opalescent. On top of this beautiful paint was intricately placed marquise stones in various designs. The stones appeared holographic with an extensive array of colors—this was definitely a look to be remembered.

One more look that stole the show in 2018 was in the music video “Money.” Cardi’s nails were extra long and mixing metals. Some nails were gold with extensions that went over her whole finger. The other fingers have more of a silver undertone featuring Swarovski crystals, areas that look like jade, and even ornaments like chains that hang off of the tip of the nail. These opulent nails will never be forgotten and are some of the most iconic looks she has ever had.

2019 was a big year for Cardi B. She became the first female rapper to win best rap album at the Grammys. Not only was her career booming, but she also had some notable nail designs.

In August of 2019, she showed the world her red, white, and blue crystal nail look. It was for a Pepsi campaign and showcased completely crystal-covered nails with three blue fingers, one red finger, and one silver nail. These nails were paired with a blue and silver checkered outfit. She was full of bling and was showing patriotism at the same time.

In June of 2019, Cardi made a subdued statement that had a lot of power and showed her nail evolution. In the “Press” music video, Cardi only had two nail looks the entire video: a white stiletto nail and a red stiletto nail. The white was reserved for court scenes when she was supposed to appear innocent. The red color was used during scenes including blood and other crimes. These simple nail themes let the video speak for itself and showed the evolution into her more elevated and simple nail designs.

2020 was a year to remember (or to forget). With the COVID 19 pandemic, there were few opportunities to get out and celebrate, but Cardi took advantage of every moment to turn heads with her nail art.

In June of 2020, Cardi showed off her signature Louis Vuitton nails to match her bag. The nails were a red, purple, and pink ombre base that has a white fade between each color. On top of the ombre base, there is the Louis Vuitton logo and design from the bag in white. This is a look that was a highlight on Instagram and turned heads in real life. These nails, unlike most of her other looks, were completed by Chuan Legend, a celebrity nail artist located in Los Angeles.

Cardi spared no time giving us another killer nail look. In July of 2020, Cardi celebrated her daughter Kulture’s 2nd birthday and went all out to impress. The nail design featured crystal ombre nails going from dark blue at the base to light blue and eventually traditional crystals. Underneath the stones was a silver glitter base to add even more sparkle for Kulture’s big day. This had to be one of the best looks of 2020.

In August of 2020, Cardi debuted her WAP music videos, which did not fall short in nail art. There are two nail looks that stand out: one that is cute and playful, and another that is a little darker and more mysterious. During the hallway scenes with Megan Thee Stallion, Cardi is wearing a bubblegum pink outfit while Megan wears a yellow outfit. To match the look, Cardi wears baby pink pointed nails with pink and clear Swarovski crystal stones. The design is reminiscent of the 2018 Grammy’s look in regard to the design and placement of the stones.

The second notable look from WAP is the all-black pointed nail with black stones. This is a very bold look and matched perfectly with the sexy group dance in the water. The dancers are wearing all black, so the nails are only fitting. The really cool thing about these nails is that at first glance, you may think that it is a simple black polish, but when looking closer, you will see the intricate placement of the stones.

October of 2020 marked another nail milestone for Cardi B. This was when she wore her iconic Reebok nails. The light blue base fades into the white base with blue Reebok logos on the top. The nails are not for the faint of heart and are at least 3 inches long. These nails were created for her collaboration with Reebok for her Cardi Footwear Collection that dropped on November 13, 2020.

2021 has just begun, so there is no saying where Cardi’s nails will take us this year. However, since the beginning of the year, Cardi has been keeping it simple with her signature stiletto point in solid colors. Some of the claw colors include blue, tan, red, black, and baby pink. She has done other things to switch it up, like do a matte nail or even shorten the length of the nail. This shorter nude nail was seen with her in a limo or car sporting her Balenciaga hoodie sweatshirt and neon green thigh-high boots.

Over time Cardi B’s nails have certainly changed. From big bows and stones to a simple solid color pointy nail, it seems like Cardi has taken it down a notch. However, Cardi still enjoys some bling for big events and music videos, going for a fancier look that screams opulence. Cardi B is still in the process of making nail history, so make sure to keep your eye out for what she will do next.

Do's and Don'ts on How to Use a Cuticle Pusher